When used correctly, a pressure cooker can drastically minimize the amount of time you spend cooking — no more waiting for your meal to finish. Ovens and slow cookers might take hours or even an entire day to prepare a meal for you; these pressure cookers do the job in minutes and give the same delicious results.

Every pressure cooker is unique. Some brands offer stovetop models, while others offer electric countertop models. They’re all straightforward to operate, but you should pay attention to the kind of settings available on the cooker so you can control them while cooking. There might be only two settings: low and high, or a variety of options ranging from high pressure to slow cook to sauté.

It’s sometimes better to have more settings so you can be confident that you’ll be able to use it for all types of recipes, not just high-pressure cooking. It’s also a good idea to keep an eye on the amount of food the cooker produces.

They come in a variety of sizes. Pressure cookers often come in 4- or 6-quart capacities, which are ideal for feeding oneself or a family of four. A 10-quart pressure cooker is the extra-large size choice if you need to prepare more than that.

This large pressure cooker holds nearly double the quantity of food as smaller models. It’s a bit much for cooking for just yourself because it creates so much food, but whatever you need that much food for, a 10-quart would suffice. 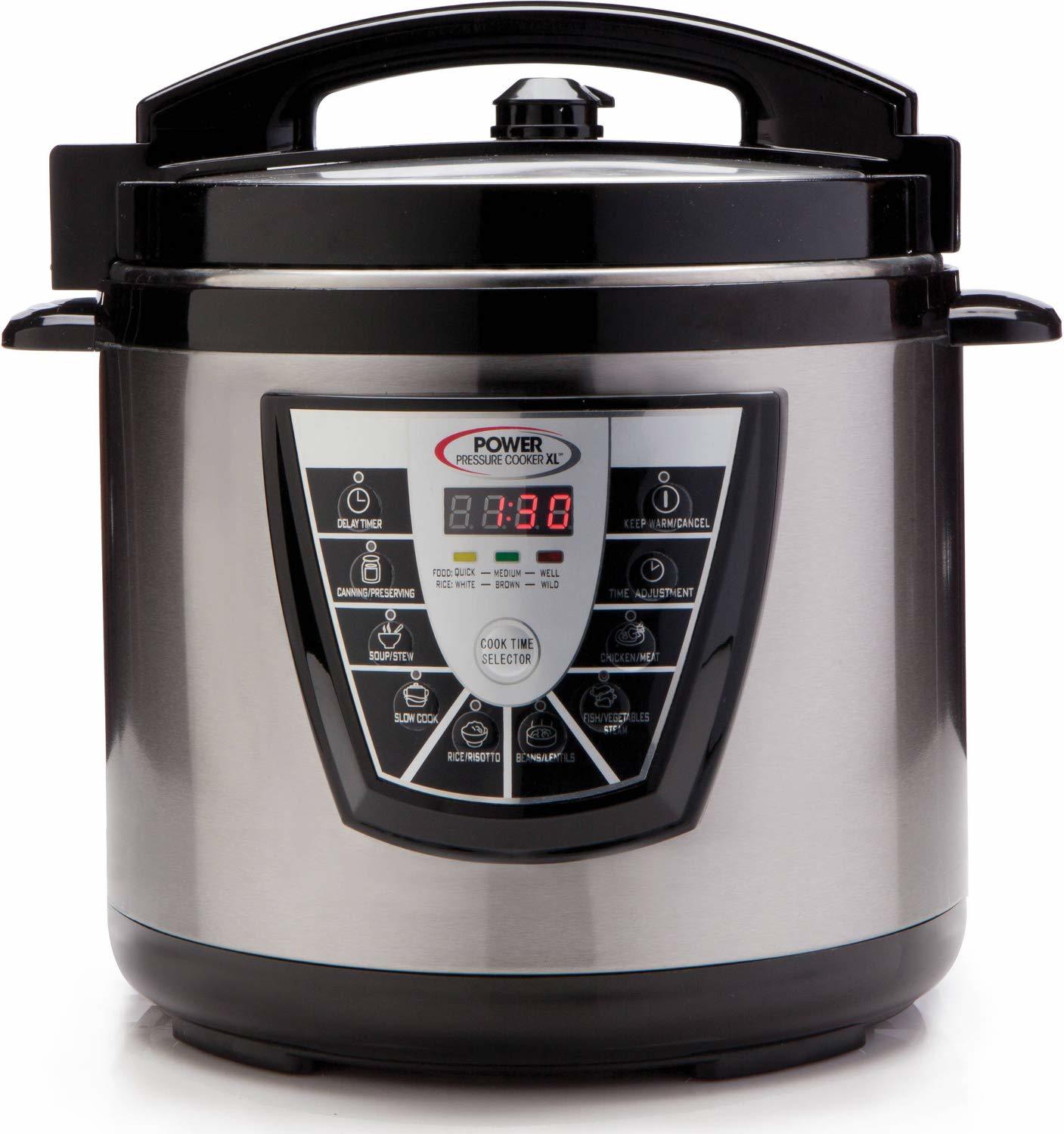 The Power Pressure Cooker XL 10-Qt is the first 10-quart pressure cooker we’ll discuss. As seen by the 4 out of 5 star rating on Amazon, it has helped a lot of individuals. Because of a recurrent issue with the Teflon covering, it only gets four stars instead of five. In general, a pressure cooker with a ceramic-coated or stainless-steel inner pot is preferable to one with a Teflon-coated inner pot. When the Teflon coating flakes off, certain chemicals are released into the meal. If it doesn’t start to flake off, it’s fine and won’t damage you, but the Power Pressure Cooker’s covering tends to flake off after just a few uses.

One buyer claimed that the Teflon didn’t present any difficulties until they opted to soak the pot before cleaning it, which caused the coating to swiftly dissolve when washed.

Apart from the Teflon issue, this pressure cooker has performed admirably. It comes with a digital display and multiple cook preset settings, as well as a stay warm mode. Three wire racks, a steamer, a measuring cup, and a rice paddle are among the included accessories. It is built of high-quality materials that will survive for a long time after being acquired. 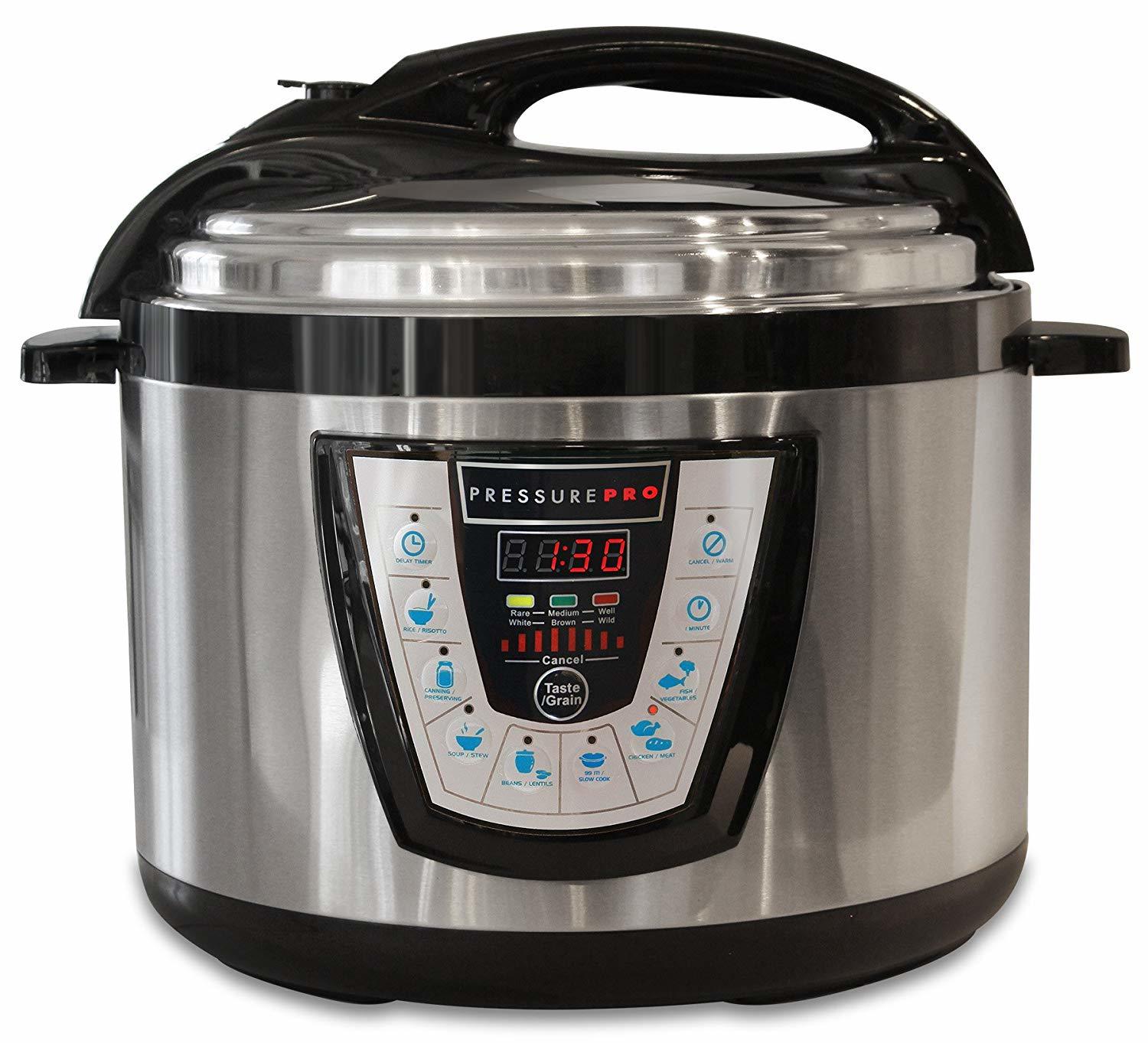 This is another well praised 10-quart pressure cooker. The 10-in-1 PressurePro 10 Qt Pressure Cooker is somewhat less expensive than the Power Pressure Cooker, depending on the merchant. This one is around $20 cheaper if you purchase on Amazon. In many aspects, they are comparable to one another: digital display, cooking preset buttons, and stainless-steel exterior layer. The key distinction is that the PressurePro’s inner pot is not Teflon-coated, but rather non-stick FDA grade, PTFE and PTOA free, which are two chemicals found in Teflon.

It’s a 10-in-1 appliance, which means it can take the place of your rice cooker, slow cooker, yoghurt maker, egg maker, canner, preserver, sautés, warmer, and steamer. It lets you to perform all of these things on top of high-pressure cooking. Because you can make so many things with it, it’s technically a multi-pot. Most other pressure cookers can’t match this. 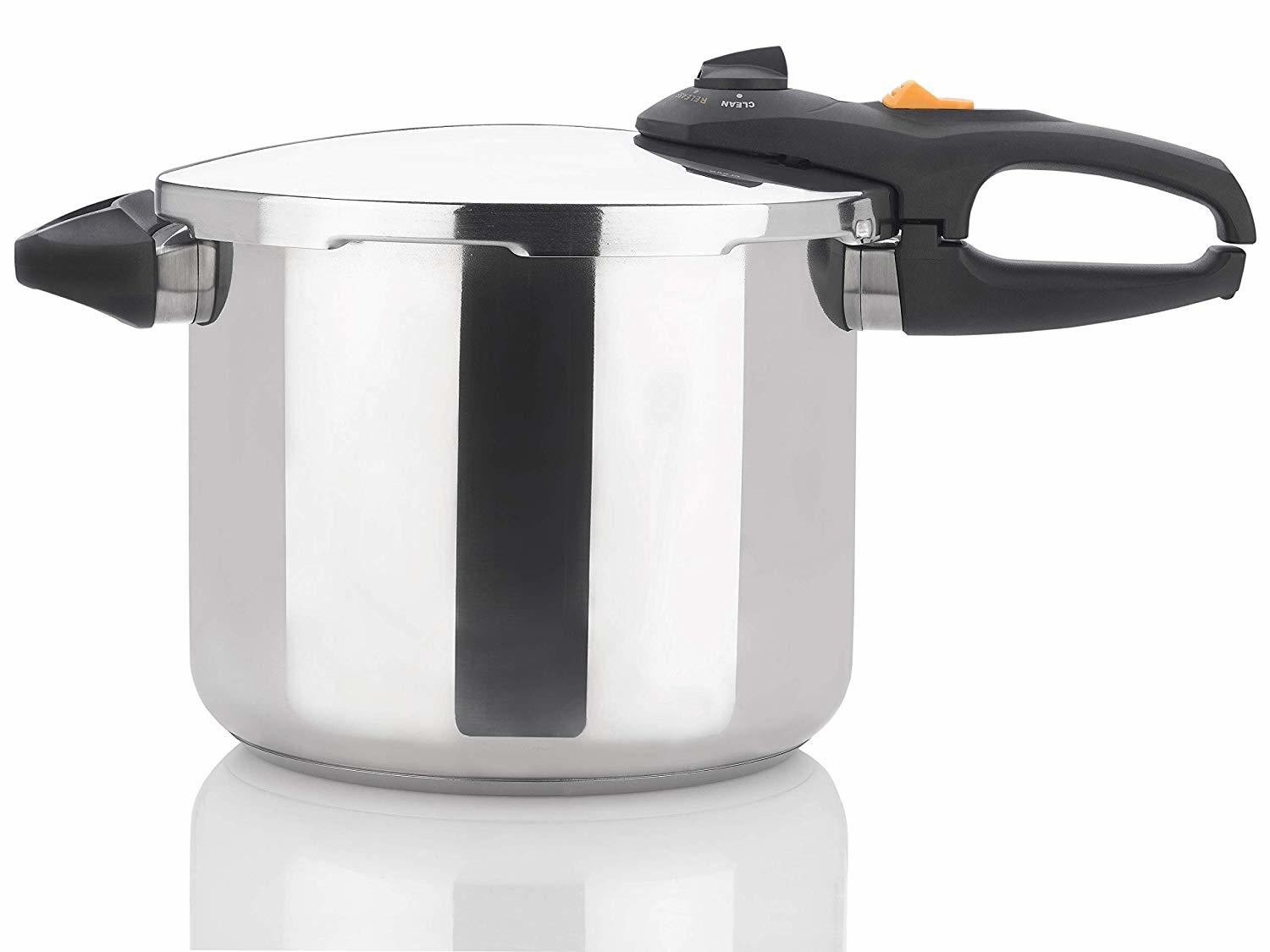 The Zavor DUO 10-Quart Multi-Setting Pressure Cooker and Canner is next on the list.
This one, unlike the others, is made on the stovetop. It may be used on almost any stove, including gas, electric, ceramic, and induction, and it performs admirably. There are no presets, so this isn’t a multi-cooker. You can only conduct high-pressure cooking and canning with it. It’s named a “Multi-Setting” Pressure Cooker because it has a pressure regulator knob with high and low pressure settings.

This pressure cooker scored just three out of five stars, compared to four for the other two. The majority of consumers were pleased with this cooker, claiming that it lasted for at least a year. One of the few issues cited is that the pressure regulator knob appears to be composed of a low-quality plastic that might easily shatter. On the bright side, when you purchase this Zavor Cooker, you will receive a free recipe book with more than 50 pressure cooker recipes to try.

Which Pressure Cooker Is Right For You?

The Power Pressure Cooker, the PressurePro, and the Zavor are all highly rated by consumers. First, select whether you want a stovetop or countertop pressure cooker; this should reduce down your options to at least two, if not one. If you have to choose between the Power Pressure Cooker and the PressurePro, keep in mind that they are fairly similar.

Each has at least one disadvantage, so the choice is yours. You may always hunt for a pressure cooker elsewhere if neither of them satisfy your requirements or needs. InstantPot, Breville, and Presto are some additional good brands.